We have received funding to support the following projects: 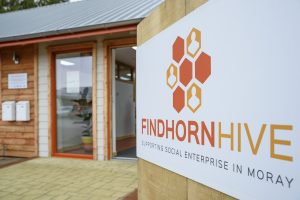 In 2017 we acquired a 0.08ha plot of land in Findhorn Park, next to our current Trees for Life Building, with a view to developing the needed office space and appropriate facilities to meet local organisations’ needs.

The aim of this project was to provide high quality, affordable office and workshop space and facilities for innovative social enterprises in Moray, within a supportive environment that fosters collaboration and the cross-pollination of ideas. The main objectives of the hub were to provide five offices for resident SEs, including Ekopia, three studio spaces (for food production/crafts), and facilities such as four hot-desking spaces for a further four SEs.

Both buildings were completed in February 2019.

We feel a huge amount of gratitude to the Scottish Government’s Strengthening Communities Programme, which allowed us to investigate opportunities offered through the expansion of Ekopia’s work into Moray, including exploring possibilities for the Findhorn Hive.

We would like to thank Moray LEADER, which contributed £350k of funding towards the project. We were also fortunate, in 2018, to receive a grant from The Pebble Trust (£5k), Naturesave Trust (£3k) and Beatrice Fund (£20.6k), to further enhance the social enterprise buildings. The grants support the hub with office furniture, landscaping, common area furniture, and a printer.

In 2013 we secured EU funding from the ERDF (the European Union’s European Regional Development Fund) for a new office building, completed in 2015 and now occupied by Trees for Life. The environmentally-friendly office is based is based in the Findhorn Community. The building was built to high ecological standards with features including an air-source heat pump providing heating, high levels of insulation, double glazing and solar hot water.

In 2006, with the generous support of Duneland Ltd. and the Soillse Cluster Group, we negotiated a new ‘Land Trust project’ which has enabled us to own some communal amenity land in Findhorn.

In 2004 we received a total of £5,000 from Development Trusts Association Scotland (in turn supported by the European Community’s ‘Equal’ programme) to research the provision of affordable housing in the Ecovillage.

Visits to Other Trusts

In 2004 we received a Development Trusts Association Scotland small grant to assist us in visiting the Isle of Gigha Heritage Trust and Mull Iona Community Trust. The Isle of Gigha was planning a similar wind project to our own (now both complete) and MICT have set up a successful recycling project.

In the same year we received £5,354 from The Funding Network to enable us to support an Ecovillage Institute youth exchange initiative to rural Bolivia with the aim of providing improved water treatment organic waste composting and reforestation. This project was undertaken in collaboration with Aldeas Infantiles SOS, LookFar Connections and Ocean Arks International.

In 2003 Ekopia was awarded a grant of £21,562 from the Scottish Community & Householder Renewable Initiative, administered by Highlands and Islands Enterprise’s Community Energy Unit. This grant was provided to support the plans for expanding the generation of electricity from wind turbines at the Park, Findhorn.

In 2002 Ekopia received a grant of £1,000 from the Development Trusts Association ‘Knowledge and Skills Exchange’ programme to enable us to attend the DTA Annual Conference in Plymouth, England as part of a Scottish delegation.