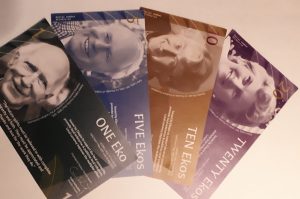 Ekopia launched a new community currency in May 2002 – the Eko, with the support of the Hygeia Foundation.

The Eko is a local currency system designed as a working alternative to £s Sterling in economic transactions, to be a viable replacement for the pre-existing “blue money” system and as a complement to local LETS schemes.

Since the successful trial, 15-20,000 Ekos have been in permanent circulation and we are now into a fifth issue (launched in November 2017).

Total trading turnover of the notes is estimated at >£100,000 per annum and several new traders have started accepting the currency. As a result of the surpluses created we have been able to make a grants to various community bodies including the Festivals Group, Youth Project and New Findhorn Association.

From the sale of the notes to community members, Ekopia has made low interest loans to various community organisations.

Visitors can receive the notes in a number of ways, including purchasing Ekos from the Findhorn Bay Holiday Park reception and the Visitors Centre.

Aims of the Eko Currency Issue

There has been growing interest in the Eko from collectors of bank notes.

We are happy to sell denominations from both the current and past issues on the following basis.

Some notes, such as the 20 Eko from Issue 2 are no longer available.